This is Linda Andersson

This week, we have met with Linda Andersson. She run’s Sweden’s biggest baking blog along with two Instagram accounts’: “Lindas bakskola” and “Lindas matskola”. In addition, she has published four baking books, two are underway. The cherry on top? She’s a part-time self-employed hairdresser. It’s safe to say that she has a lot on her plate.

Would it be fair to say that you have started a company out of a passion?

Definitely! Baking has, ever since I was little, been a passion of mine. However, it is nothing but a mere coincidence that it became my full-time job. My journey to self-employment began when I was working for the magazine “Hembakat”. I’ve worked as a graphic designer, reporter and editor. None of the above, have anything to do with either baking or blogging. However, when the editorial staff were asked to become more digitalized, I came up the idea of creating the blog: Lindas bakskola. It was a hit immediately, and within no time I was on the cover of Sweden’s biggest baking magazine.

Would you say that you are a born entrepreneur?

No, I wouldn’t go that far. However, my knowledge combined with everything that life has taught me, has probably made me to that of an entrepreneur. Courage made me who I am along with always having a plan B in case life would throw me a 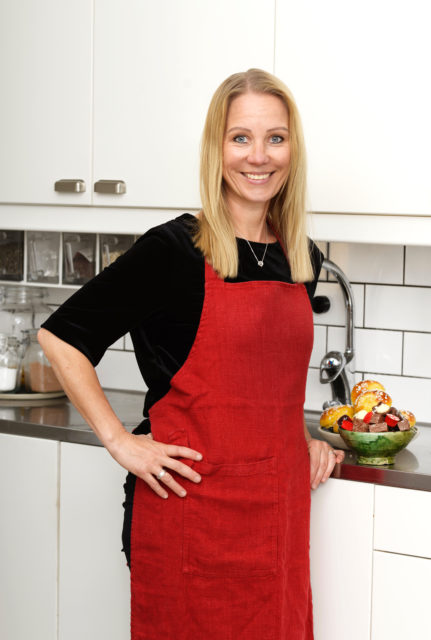 What was the factor that made your company go from an idea to a company?

Timing is key. Everything happened really fast, and there were multiple factors that allowed me to start my own business. I was among the first ones to actually starting my own baking blog. Luckily it received a lot of attention already from day one. I was an employee of the magazine “Hembakat”, with the blog being my side business. I already had my dream job, which made the decision of opening my own business a lot harder. However, a lot of people payed attention to my blog and I decided to take a long shot. To this day, it’s been the best decision I have ever made.

Has your strategy for the company developed over time or has it stayed the same?

It’s been pretty much the same. However, I put less effort into my blog today, than I did in the beginning. It’s more fun to bake when you don’t do it every day. The first two years as self-employed, I was home in the kitchen baking every day. At first it was great. However, it became lonely after a while, which is when I set my mind on becoming a hairdresser. Today, I’m a part time hairdresser, and I rent a chair at a salon. I’m fully booked thanks to a lot of my customers following me on Instagram.

What do you want to say to other future founders/entrepreneurs? What is your best tip when thinking about starting your own business?

Broaden your knowledge of the industry you want to proceed and succeed within, and read up on how to increase your profit – without income it’s impossible to run a successful business.

What would you say is your greatest success and greatest failure/challenge?

My greatest success is that my recipes and books are easy to understand, along with snapping “step-by-step” pictures which make them easy to follow. The challenge is definitely to come up with new, inspiring recipes. Last year I was awarded “This year’s entrepreneur” and “This year’s food instagrammer” – both prizes were truly appreciated. It’s an honor that people pay attention to my work.

This interview series is created with the overall aim to empower and emphasize female entrepreneurs, and have them sharing their stories through their own words. If you want to read more of Linda and her baking, follow her on Lindas bakskola, or @lindasbakskola.

If you have any questions, don’t hesitate to contact us at info@stinaaj.com.

This is Emma Israelsson

Emma Israelsson created her jewellery line, which gratefully goes under the same name, seven years ago. She founded her business with great passion, a clear…

This week we've spoken with one of the two founders' of popular perfume service Sniph, Tara Derakshan, to find out how she and her co-founder…

Subscribe to our weekly newsletter for the latest style catch, inspiration and updates – and of course, to fill your week with love.

As a treat to you for joining our community, we offer you 20% off on your first purchase.

Thank you for becoming a part of the Stinaa.J family. We look forward to bringing you updates about our brand!